Earlier this afternoon, just as I was wondering when on earth the book Typewriter Revolution could be delivered, the courier appeared right in front of me, holding a big yellow envelop and asking me to sign on it.

Yes, it's the book Typewriter Revolution that Richard Polt sent to me. Finally, it arrived after almost a month's waiting. 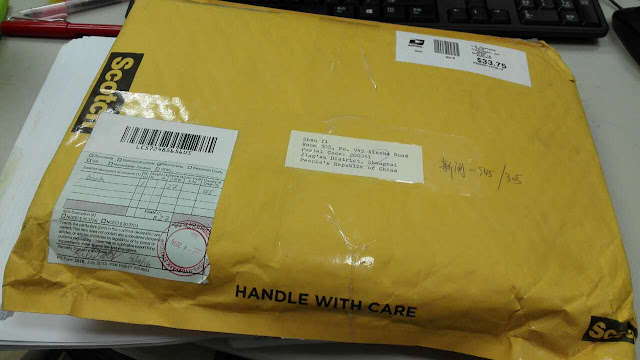 Look how meticulously Richard has wrapped up the book layers after layers....And I think the tinfoil could be re-used right away in a bake oven to prepare tonight's dinner! 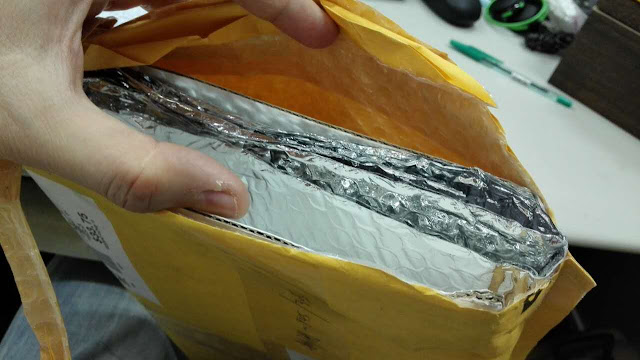 The address was neatly typewritten....yeah...how could Richard possibly forgot to do that as a typewriter enthusiast？ 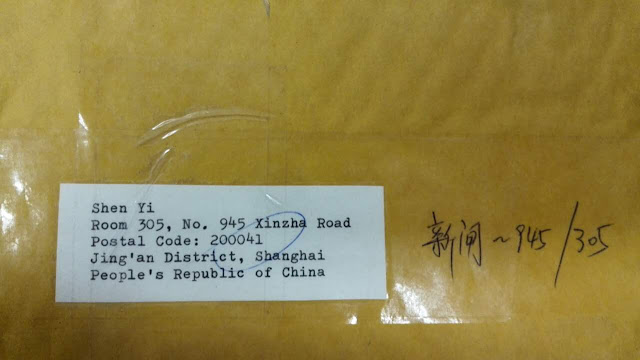 On the second page, Richard autographed for the book and also wrote Chinese characters for "typewriter".......... That's some good penmanship.......well, for a foreigner.:-p 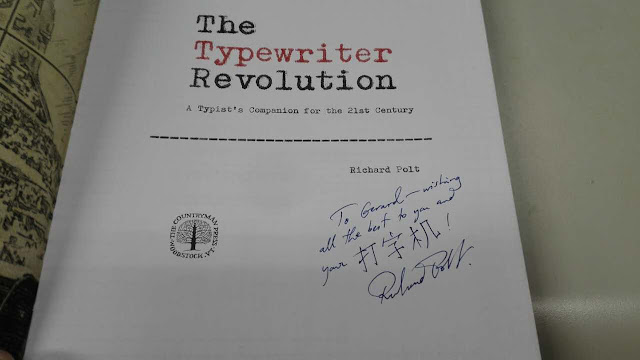 To those who don't understand the dilemma I'm facing with: buying books from eBay US is prohibited. I think the restriction is set by US rather than by China side because buying book from,for instance eBay UK, is without any hassle. (It is probably because China and US's disputes on intellectual property issues for which China has a world-wide notoriety.)

When it comes to book purchases on eBay, I usually ask friends in US to help. But for this book, who can be of better help than Richard himself？I sent him an email directly.

I didn't know the book had been published until quite recently. B-spot was blocked in China...Well maybe block isn't the exact word. You see, most international websites,including Google, Facebook, Youtube and Twitter, cannot be opened here.

How come? Blame the Great Firewall of China (GFW)!

Starting from 2008, (if memory serves me right) a "white-list system" was launched by the Chinese government in the name of fighting against pornography and terrorism. It's a step-up from the CISCO-empowered Jindun (Golden Shield) Project China that has since 1993 to fight against computerized crimes. In 2002, China started to completely censor Internet information. The Ministry of Public Security requested that all foreign internet companies wishing to operate in China to register their Internet domain with agencies affiliated to the Ministry, which then would issue license to them. Those who didn't register or denied a license were denied entry.

In this way, the Chinese government manages to keep their hands clean by saying: "You see, it's not that we don't allow foreign internet companies to operate in China. It is their responsibility to prove that they will comply with Chinese laws and regulations in the first place."

But why eBay/Amazon is not blocked? Because China needs eBay/Amazon for export. And for hundreds of thousands of trade-oriented manufacturers in China, especially those smaller ones, eBay/Amazon is their livelihood, more so against the background of a worsening foreign trade sector in recent years.

Therefore in order to browse other typospherians' blogs on B-spot, I installed a pay-for-service VPN (Virtual Personal Network) to circumvent the restrictions.

VPN is gaining growing popularity in China. Friends and colleagues frequently and openly exchange information such as which VPN provider offers the best deal. The communists know the situation. Many believe that they tacitly approve its wide existence. There is a time when VPN was even censored/banned from Chinese search engines and social media platforms, but now they are becoming more visible.

There's no legislation criminalizing the use of VPN. Find your own way to browse these "banned" websites is also OK. So don't worry, I won't be arrested for what I've written on the blog. After all, China is not as bad as North Korea.

You probably will ask: "Isn't that a loophole in China's legal system?" My answer is no. In my humble opinion, it has a lot to do with the Chinese philosophy: We are a people who don't believe in absoluteness. Instead, we believe in mildness and moderation. Government officials are Chinese, so they cannot be exempt from such thinking.

More importantly,the communists are fully aware of the fact that, in today's information age, academia needs to search for information online, and businesspersons need to communicate with their clients using web-based mail services such as gmail. If completely blocked,none of these could be done in this country. Then the nation's cultural development would stall, economy collapse and people's livelihood destroyed. If that happened, what would be the purpose of building a clean and secured country?

I assume that the communists also feel somewhat guilty for blocking the international websites, but they are simply too incompetent to find better ways to "protect" the virtual space of such a vast country like China with varying levels of development in different parts and in different fields.

Why would they feel guilty? Because like many generations of Chinese born after the WWII, they were also repeatedly taught and constantly reminded of since early childhood that it is the arrogance and ignorance of the late Qing Dynasty（1616-1912）rulers who hermetically sealed off the nation from the rest of the world, plunging the nation into 100 years' of impoverishment,debility and repeated foreign aggression, and that China cannot afford another darkest period in her history. It is their conscience that tells them, if completely blocking international websites, they would be the modern-day Qing Dynasty rulers. They surely know what would come next. Trust me, they don't want to be that sinner!

Paradoxically,even government's tacit approval doesn't rule out nationwide crackdowns from time to time, particularly when VPN providers publicly advertise their services and competing for clients. Obviously, their omnipresence is viewed by relevant government departments as a blatant challenge to their authority. This is another typical Chinese mentality: We know what you are doing secretly, but just don't flaunt it.

That said,I'm not justifying that blocking the country's Internet connection with the rest of the world is right. I tried to provide some perspective from where I'm standing. 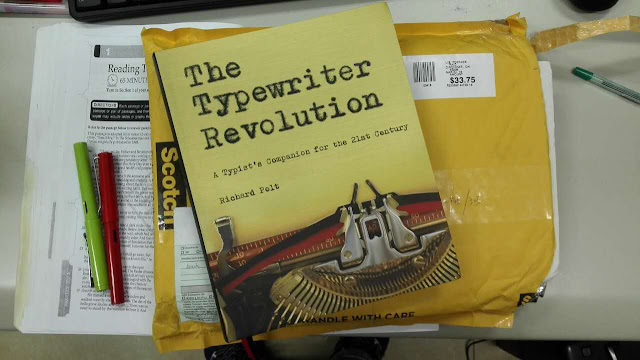 Thank you Richard! You have got a fanboy in China. For the next several days, I will be reading it.

And, Ladies and Gentleman, ( drum up )

To prove my allegiance to the typewriter revolutionary cause, I now solemnly proclaim that, from today on, I, Shen Yi (a.k.a Gerard), serve as the General Commander of the China Brigade of the Typewriter Revolution. Let's sabotage from within the Internet Dictatorship!

(I'm expecting deafening applause from typospherians around the world.)