I've long heard about how good the Hermes Ambassador is. I do have one already, but it is an International Edition from the 1970s, the white plastic boxier design. I love it too. However, it doesn't seem to be enough to quench my desire for an older edition. So I recently bought this one from eBay UK at the price of 80 pounds.  Its original owner Alex is from Lanchshire, England. Alex is already 95 years old . This typewriter was bought for his wife Joan. Among other domestic communication and letter-writing, Joan mainly used this typewriter to type up dissertations for their eldest son who is a teacher.  The seller, Mark, who communicated with me back and forth, is his son-in-law.  This shopping experience changed my impression of English people, from being courteous, dignified but sometimes a bit too cold and distancing, to warm, being patient and with good humor. 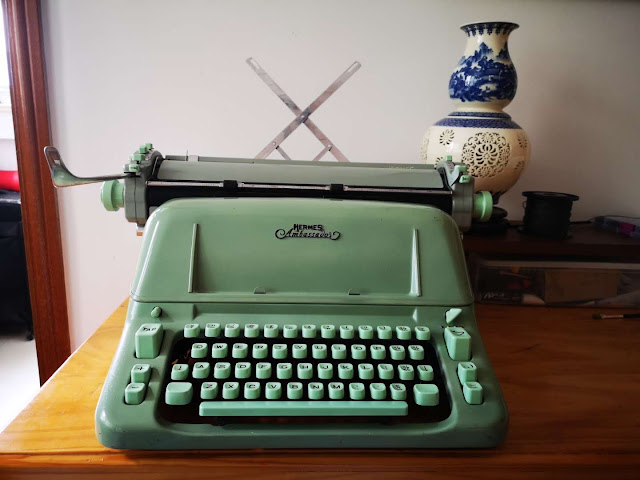 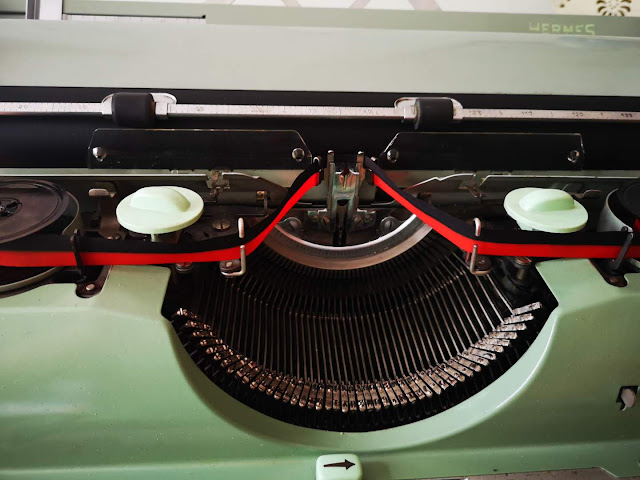 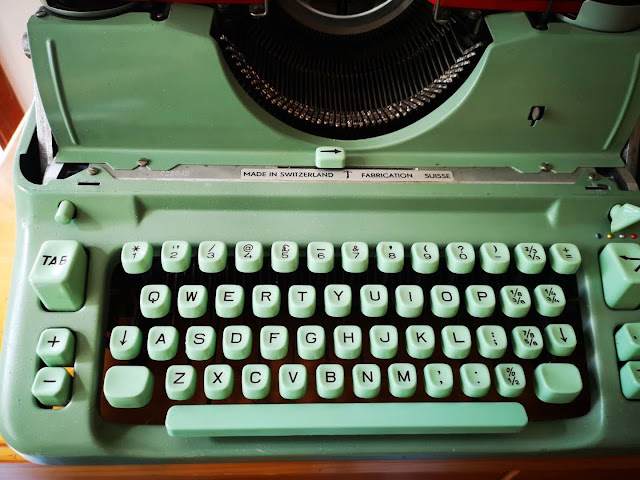 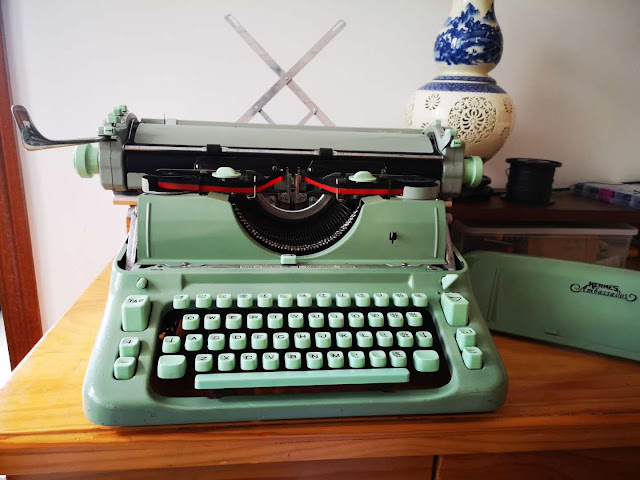 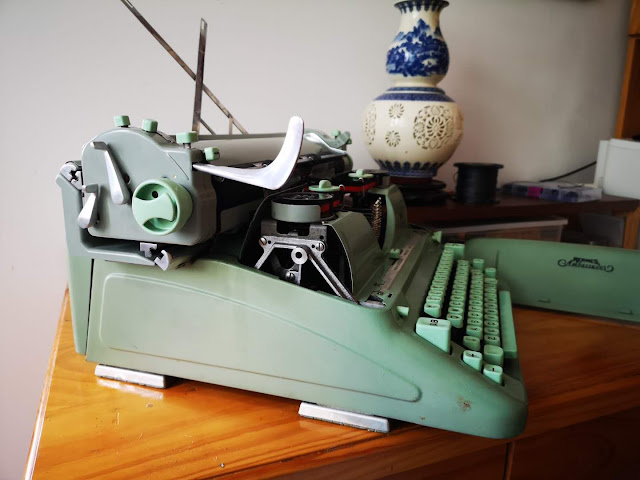 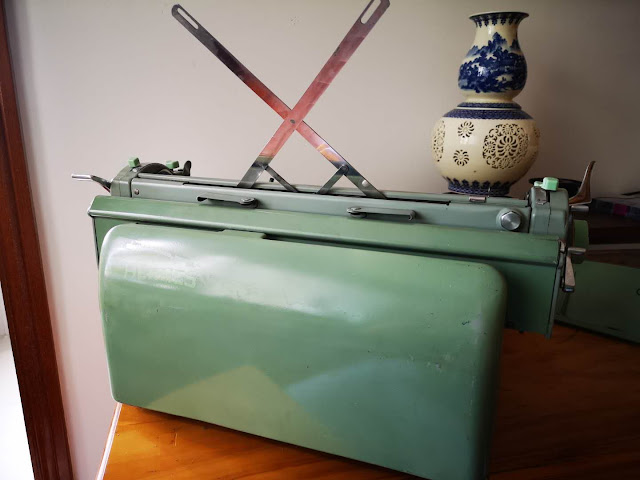 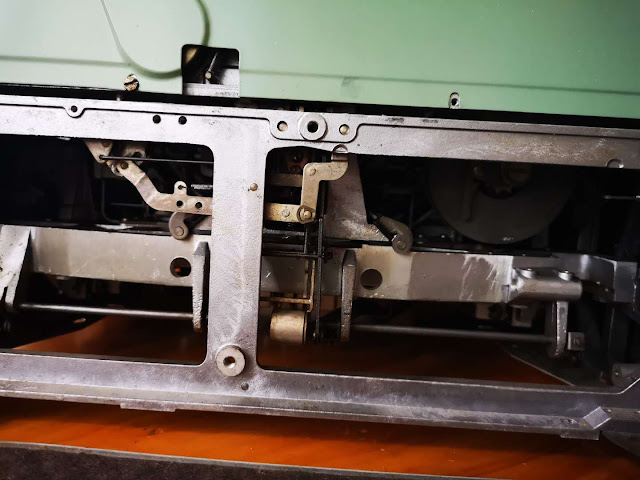 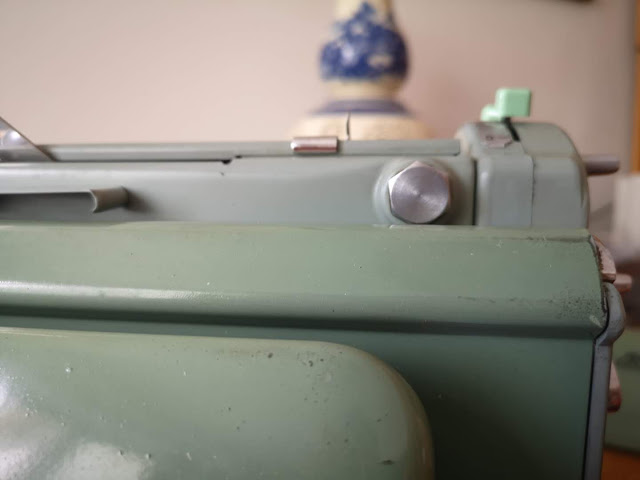 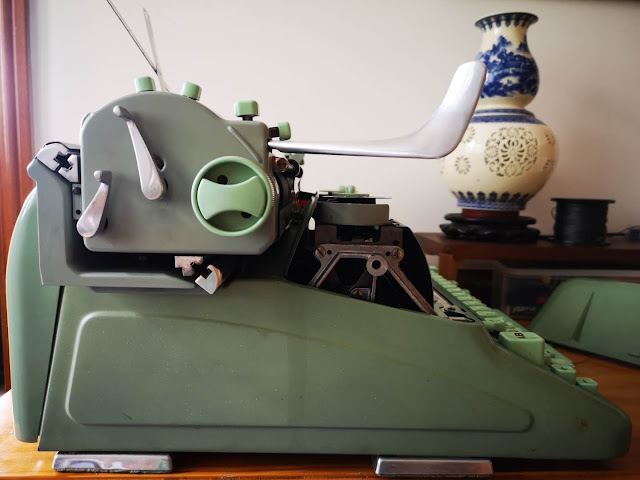 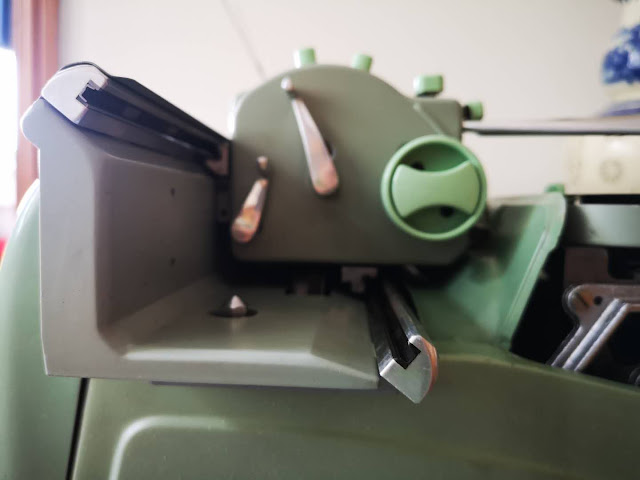 According to TWDB, this machine, serial No.926548, was manufactured between 1962-1963. So half a century has already passed!  That's why I'm stunned by how clean and new this machine is.
Upon arrival, there were some  issues very likely  due to transit-related damages as a result of improper packaging. I'm not blaming the seller, it is not his fault either. I think he just didn't know how to pack securely. To be more precise, the TAB was messed up, causing a major gumming of the carriage every time I accidentally touched the TAB button ( but who can resist that temptation not to touch that huge butter-like button! ) Part of the reason is that the machine was positioned upside down inside the box. That position is very likely to cause internal damages because, when turned upside down, gears, levers, nuts and screws would likely be either displaced or dislocated.  At first I thought I could live with these little imperfections, then I reneged.  I couldn't sleep  that night.  There was a sort of strange sense of obligation that drove me to fix it.  So early next morning, I opened the backwall of the machine. I also opened up my 1970s  Ambassador for referencing.  To my disappointment, Hermes redesigned the later model.  That means I was pretty much on my own. Luckily, after some careful analysis, I discovered a bent and dislocated lever linking the TAB key and escapement. I fixed it and now it's operating smooth as butter again. 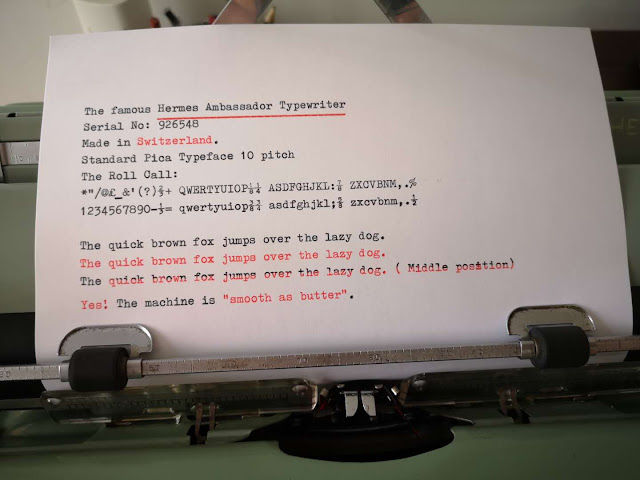 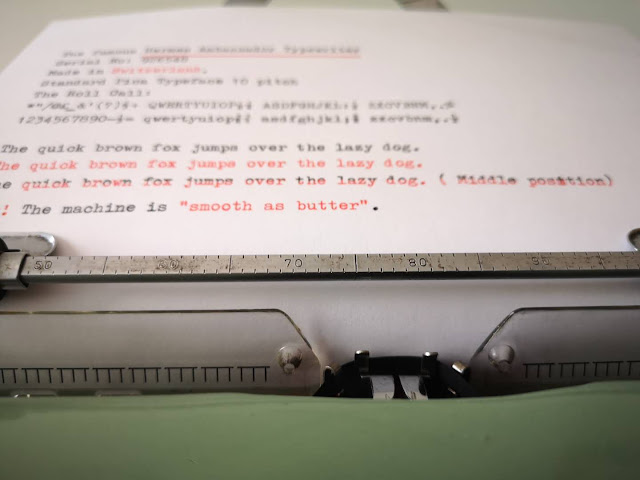 As you can see, this machine came with standard 10 pitch PICA typeface. The platen is not hardened yet, it doesn't leave any prints on the back of the typing paper after being typed on, another testament to its high quality of Swiss engineering. Very impressive! Although I'm not a huge fan of PICA typeface, considering its age and high quality, I'm still very pleased with this purchase. 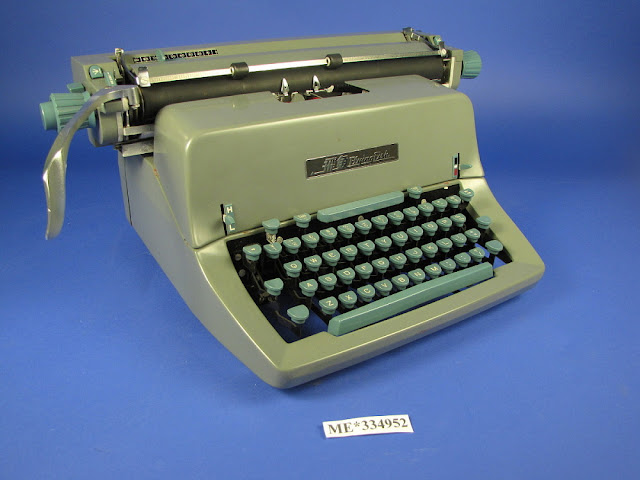 BTW, guess what does this Hermes Ambassador remind me of? The earliest design of the Flying Fish PS model made in China! I don't have one though. Pictrured here is in the collection of Smithsonian Museum.  ( I spent entire four days in Smithsonian Museums during my visit to Washington D.C. in 2008. ) To my best knowledge, these earliest models are mainly for EXPORT ONLY.  That explains why they are not common in local second-hand markets. At least to me, Flying Fish's  greenish-gray look, knobs, carriage return levers and press-button margin settings all exuberating Hermes Ambassador, and its body, turquoise finger-shaped keytops, ribbon vibrator, color selection and touch control clearly an Underwood Golden Touch, also the whole machine finishes off with a final touch reminiscing of a Remington standard overall.
According to the museum's website, the Simithsonia's Flying Fish was exported to U.S. via Shanghai Light Industrial Products Import and Export Corporation in1975 and probably sold to US in the same year.  To give fellow typospherians a bit perspective,  China and US restored diplomatic relationship in 1979. It was during the Carter adminstration. Therefore it is safe to conclude that US started to draw up plans on rebuilding economic ties with China before 1979.   Mike Pence isn't all wrong by saying that the West, in particular, US, helped China enormously in her economic rise by offering technology, funding and the much-coveted market share. But what the Trump-Pence administration isn't right is that Pence says China forgets. That's ridiculous.  At least, as a full-blooded Chinese, born and raised in Shanghai, China, I remember!   I, and many of my folks remember even older history. We remember that US soldiers (the famous Flying Tigers ) helped us to fight against the Japanese during the WWII. We, as a nation,  are forever grateful and feel indebted to America and her great people. An entire generation of Chinese grew up, watching American cartoons, TVs, movies, listening to American music. We remember that we used to hold it so dearly that US shines as a beacon of democracy, of equality and of freedom. But the Trump-Pence administration is destroying all that good faith, plunging the China-US relationship to all time low, posing even potential risks of military confrontation between the world's biggest powers.  That is more absurd as Trump's Covid-19 policies.
Don't get me wrong. I have the least intention to "intervene US presidential election". And as a typospherian,  I'm not supposed to talk about US politics, but I simply cannot help it.  FOX News is blasting election news right now (Yes, we too can have unlimited access to foreign TV  in China. It's just some of us don't know to bypass the nominal techical restrictions imposed by the communist government.) and Trump is once again pointing finger at China. Come on, Mr President, this is a Why-You-Should-Reelect-Me campaign, not Why-You-Should-Hate-China! How possibly China is responsible for YOUR failure? How possibly China can steal everything from US?   Remember, what is morally wrong can never be politically right! 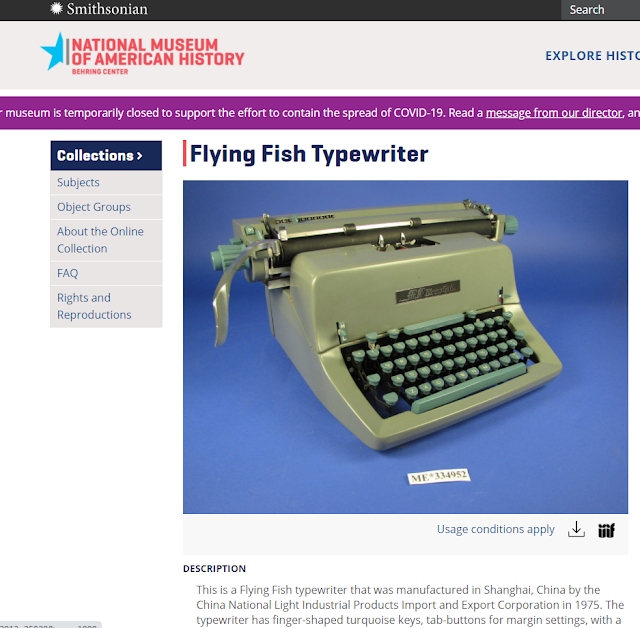