Hi Typewriter fans from around the world!

My name is Shen Yi  沈祎. Friends call me Gerard. I'm a registered journalist based in Shanghai, China. In a span of 13 years, I've collected more than 60 typewriters, mostly from overseas.

After viewing so many wonderful wonderful typewriter-related blogs and websites, I decided it is my time to contribute.  As English is not my first language, please forgive my grammar mistakes here and there.

The aim of my blog is to add a China perspective on typewriter collection.

Pictured below is a Flying Fish (Model PSQ) typewriter manufacturered in late-1979. Serial Number: 99700. It is definitely among the earliest production of Made-in-China typewriters. I bought it on taobao.com, China's ebay, for 200 renminbi, or approximately 33 US dollars . The seller, a general collector himself and dealer of vintage stuff, certainly have no idea of what's so special about this typewriter.

Officially named as Flying Fish Model PSQ, it is an imitator of a 1950s' model of Adler Tippa. China didn't have its own typewriter industry until late 1960s. The country totally relied on imports to meet its needs before that. 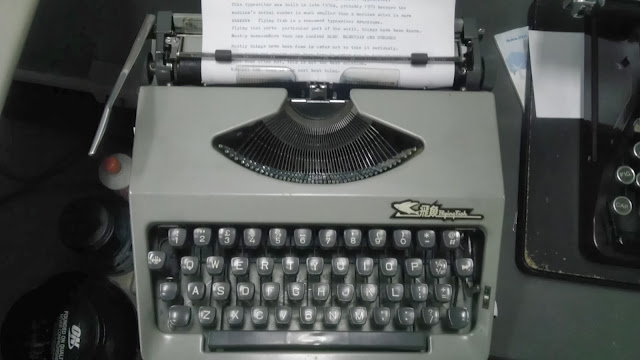 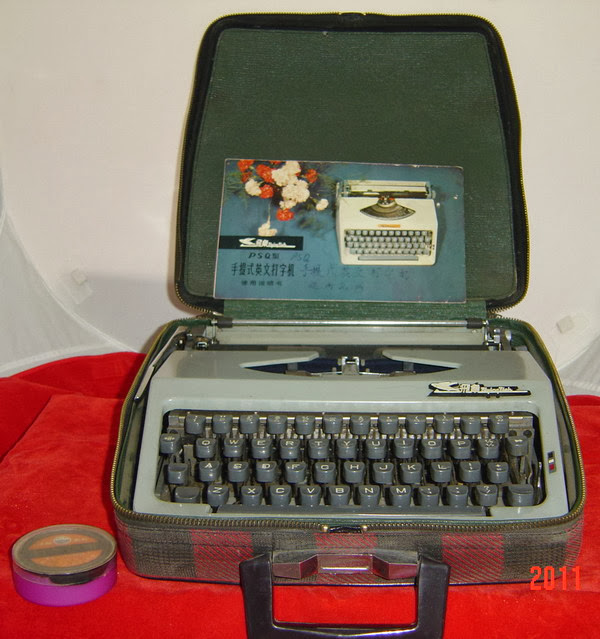 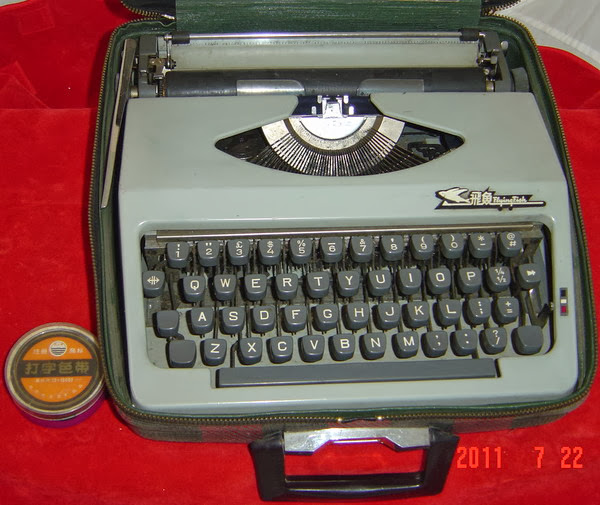 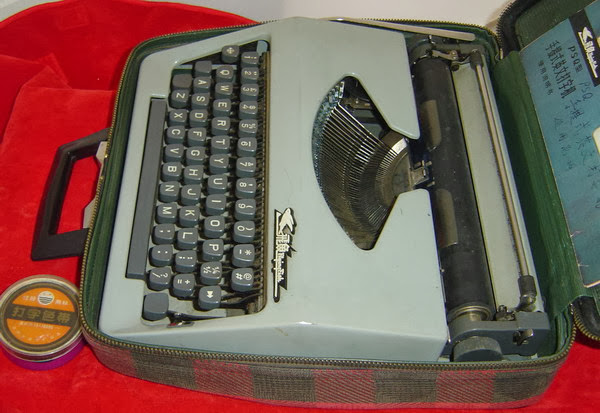 According to Shanghai Archive, only 36 Flying Fish PSQ typewriters were made by the erstwhile Shanghai Mechanical Calculator Factory every year in early-mid 1970s. Then the number soared to 350,000 in late-1970s to early 1980s, coinciding with China's policies of opening-up and reform. The Chinese communists finally decided to abandon decades' of confrontational policies with the West and embraced global trade, being identified as a quick way to earn dollars and hence the need to build China's own typewriter industry.

Flying Fish PSQs were later re-branded as Hero typewriters. They were assigned to Shanghai No. 2 Typewriter Factory under planned/command economy.  Meanwhile, Flying Fish as a brand was assigned to Shanghai Typewriter Factory, which imitated a later basket-shift model of Adler Tippa.  I will write a separate post about it.  Understandably,  neither of these two typewriter factories exist today. 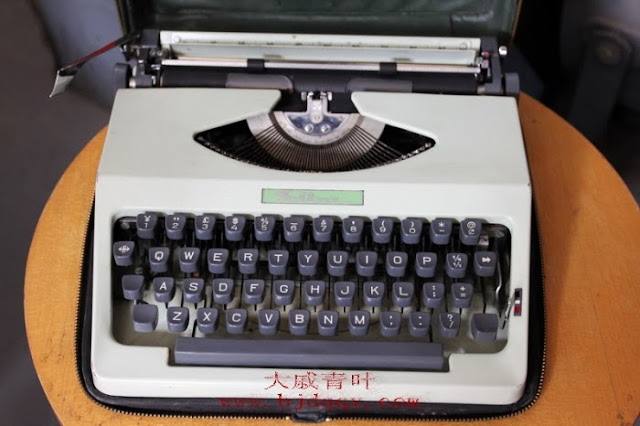 Based on my  investigation, the above pictured, also branded as Flying Fish PSQ, is among the earliest batch of made-in-China typewriters, though they are mechanically 99% the same as the second and later models.  Most of these Flying Fish PSQs have Elite fonts (99 characters per line) as opposed to Pica (84 characters per line ) for almost every later made-in-China typewriters, which is boring!

Believe it or not, these early batches of Flying Fish PSQs are almost as good as Adler Tippas originals . Compact, crispy and carriage shift, it proves to the world how good Chinese craftsmanship could be if the country gets serious about "putting quality first". As China also exported these typewriters to earn money from foreigners,the manufacturers didn't skimp on raw materials either, unlike the later models built in mid-1990s and early 2000s.

There's no intellectual property infringement involved as Adler's patent protection had already expired at the time of production. At least I was so told.

Upon arrival, there were some minor problems about the machine. These problems were fixed by Mr. Lu, a retired typewriter repaireman already in his early 80s and also my what Chinese would call a  "regardless of age difference " kind of friend. At 18, Mr. Lu was apprenticed to a village folk, who is a few years ahead of him, to learn how to repair typewriters . He told me that, when he first started his career, Underwood 5 had just been launched onto the Chinese market.   He didn't retire until 70s in 2001. Normally Chinese men retire at 60 and women 55. He explained it was because his skills were badly needed in late 1980s and early 1990s.  Many a time he lamented: I'm dying, then who can help you repair typewriters?  ahh....how sad! 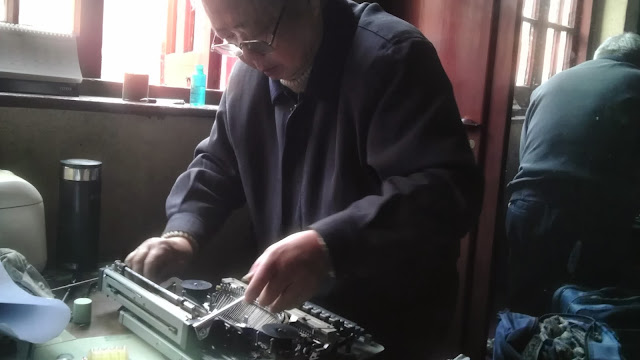 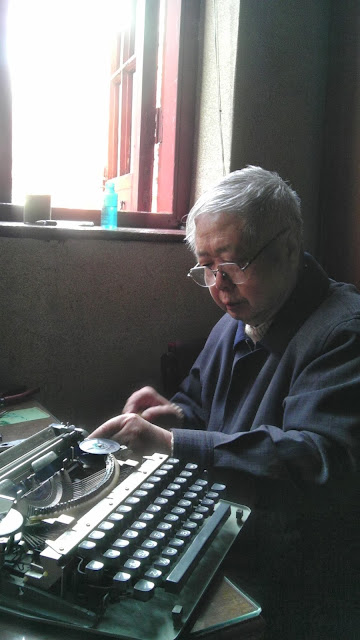 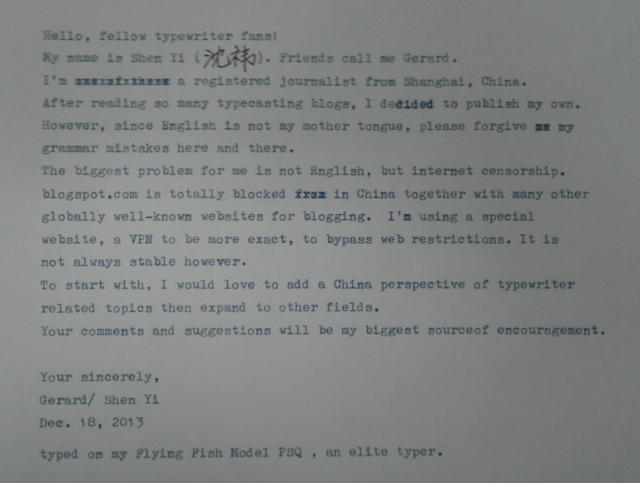