A huge sorry from me. The phrase "bad-mouthing, China-smearing son of a .....bourgeois." was supposed to be a sarcasm, or as I now realized, a bad-taste humor.

What I wanted to stress is that these Chinese typewriters made after 2000 are arguably the worst machines ever built. I've even posted an article about my experience with one such typewriter.

The following is a link:


But if you ever say that,--- "the quality of Chinese typewriters are terrible"--- out loud in public in China, very likely you will encounter massive criticism and even insult. You will be labelled as "just another arrogant bad-mouthing westerner looking at China through color-lens and not without an ulterior motive". FYI, the motive is to smear the image of China internationally.

Ironically, such an indiscriminate accusation would be jaw-droppingly regarded as patriotism in this country.

Allow me to digress a bit. In 2011 a private business owner from Zhejiang Province, a major manufacturing base in China, was sued in US for IP infringement. The US court that handled the case ordered the Chinese company to pay a hefty sum of money to the patent holder. At the same time, the Chinese company was forever banned from the US market. Fearing that such bad news would affect his business in China, the Chinese businessman held a news conference as soon as he returned to China. When talking to Chinese media, he blatantly accused US of "wielding the weapon of trade protectionism" and that "US is afraid of a rising China". I, as journalist, was at the press conference. I was aghast that the very next day, several major newspapers carried that story, with the  wrong-doer sitting upright in a news photo pointing finger at the U.S court decision.

Patriotism in China has been so overstretched to the detriment of hindering real progress in some cases. That's the heinous side of "face value" that we Chinese have long-cherished.

Thanks to growing western influence, a younger generation of Chinese, me included, prefer to call a spade a spade. So I used that "son of a...."phrase to satirize the unique brand of Chinese hyprocrisy. Had you read into my original comment, you would have found that I also satirized poisonous food and air among many other social ills that China is experiencing.

A lesson is learnt,Mr Robert Messenger, when engaging in cross-cultural communication, I should have realized that my sarcasm could be misunderstand in another culture.

Again please accept my heartfelt apology. Your regular feeds of typewriter-related knowledge shoot like a warm breeze (filled with smell of vegemite.)  I feel like owe you a big favor for keeping me entertained day after day. There's no reason for me to insult you as such.

The enclosed is the pic of the front page of a most recent edition of People's Daily, national-level mouthpiece for CPC  (Communist Party of China). Within the red frame is an editorial piece entitled " Shinzo Abe deserves sufferring from insomnia". Japan's Prime Minister Shinzo Abe recently paid a visit to Yasukuni Shrine where 14 WWII war criminals were worshipped. Putting aside the controversial visit, the paper has just hit another new low in journalism. 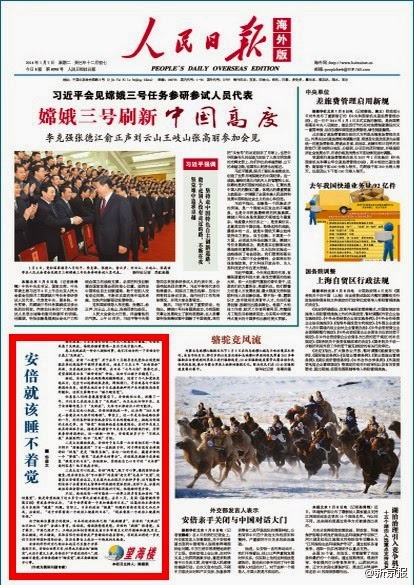