Many typospherians have mentioned the Shanghai Weilü Mechanical Factory that still produces the Rover typewriters. Lim Foo-Ho once asked about my opinion whether it is a good idea to buy one such typewriter for his new novel project.

The factory, located in a faraway suburb, is what Chinese would call "a village-level manufacturer", synonymous/notorious for poor quality, unscrupulous business practice, low or totally non-existent environmental standard and mainly in the rudimentary sector.  I'm fully aware of the fact that, since typewriter is no longer widely used, the company is probably off the radar of any form of government supervision. These companies are, since long ago, left to swim or sink and QC is totally in the hand of the manufacturer and importance accorded to QC depends on proprietors' conscience.

That all said, I still called Ms. Li Yufang,a 41 y/o local woman (a.k.a. Betty), a contact I found on the Internet, partly out of my unquenchable thirst for typewriters, partly curiosity and the remaining,out of my trust to luck.

I know that Rover produces a Special School Edition model with mathematical symbols, so I directly asked Betty for it, She replied that they have brand new ones right from stock and asked RMB 550 for it, approximately 91 US dollars. But she turned down my repeated requests to pay a visit to the factory or take pictures of the workshops and stuff.

As Richard Polt once lamented about the poor quality of these OEM (original equipment manufacturing) Royals in his post Review of Royal and even wrote a poem to satirize it, I demanded Betty to send over some pictures first before I could confirm any order.

Below are the pictures she sent over. Ahhh..... Thank God, I haven't paid a cent.

For one thing, the machine could not even produce a neat line. Taking a closer look, you will find the slug "8" is welded upside down!  Please bear in mind, this is a brand new machine, not some well-used 40 y/o typewriter  on ebay! Betty argued that the "situ-8-tion" could be easily adjusted, but why should I pay for a typewriter that is not in its perfect condition since day 1? No wonder she didn't want me to visit the factory!

From what I found on the Internet, I can be 90% sure that the real Rover Typewriter Factory using IMC/Italian technology has long gone, leaving its production facilities to Weilü at a very little cost.

Presumably, Weilü speculated that there is still a small market for typewriters and decided to give it a shot.  On its product catalog, you will find FLYING FISH desktops, Hero Model 110, Rovers and Olympia Traveller C. I think its poorly trained workers probably have no idea of what a decent typewriter is!

I will write some thing about the Rover Typewriter later, which was successful in late 1990s up to probably mid-2000. It suddenly occurred to me that, in 2004 or 2005, I called one of Rover's sales rep, he said he would be very happy to show me around the factory if I ever visited. I didn't make it because Rover didn't produce typewriters with what OIympia named Congress font that I desired.

This, together with previous reviews by Richard Polt and Robert Messenger,is enough to dampen any collector's enthusiasm to buy a brand new typewriter from China. 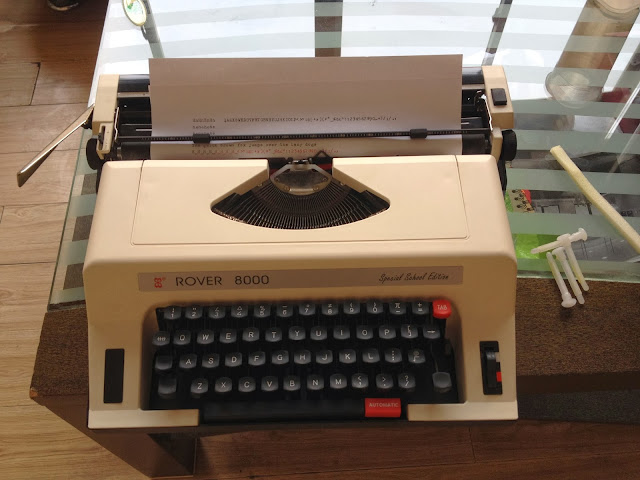